So I've just returned from Prince William Sound on a three week trip attempting to film/shoot Salmon Sharks....that's another story. However prior to my leaving, I had my RED ONE upgraded to the new MX sensor. All I can say is that the rumors and hype are all true. The MX sensor is an AMAZING update. The obvious for me shooting underwater is the clean blue channel. In the prior M build, there was noticeable noise in the blue channel and then the cream on top of this is the fact that the sensor is now rated at 800iso up from 320iso on the M sensor.
Read more »
Posted by RedCineUnderwater at 1:34 PM No comments:

Email ThisBlogThis!Share to TwitterShare to FacebookShare to Pinterest
Labels: Stories

It's now my second trip to Alaska's Prince William Sound and we are green lit for a National Geographic documentary "Icy Killers". A one hour documentary on Alaska's Salmon sharks. I'd spent a few weeks in July working with Ken Corben of Dangerous Passage Productions testing our new underwater RED housings. These were the first two RED's to go underwater and shoot for a natural history doc and we had to overcome a great number of challenges. I won't go into detail about those challenges, but basically we're shooting a cinema camera ENG style with virtually no focus/iris control and shooting early BETA builds of the RED camera firmware. We were basically on a giant learning curve and relied heavily on Mike and Pat Devlin at Dangerous Passage to turn RAW images into color corrected prores files. I'll just say that the post guys spent hundreds of hours in post getting color corrected images to prores.


Read more »
Posted by RedCineUnderwater at 2:35 PM No comments: 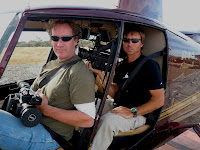 March 2008:
This was a first professional assignment for me using the RED ONE both underwater and topside. I joined Ken Corben who was working on a story for Mike Devlin of Dangerous Passage Productions an Alaska based production company. Our assignment:  a story about African Wildlife Veteranarians doing their work in the bush and wildlife game ranches of South Africa. By this time we had already been working with the RED ONE for about six months and the RED camera firmware and upgrades were developing and breakneck speed.

Read more »
Posted by RedCineUnderwater at 9:29 AM No comments: